There's always that one surprise meeting that makes you feel a lot like something of a fanboy.

During the past year, I have met a lot of key players in the Ontario Craft Beer World.

I met Peter Bulut, the owner and "Chief Brewing Officer" of Great Lakes Brewing when I popped into their retail on February 12th, their 30th birthday with a chocolate-caramel cake - you know, just like a stout but in solid form. And without the alcohol. But almost as good as beer. Without thinking, I bought the cake at a Walmart, rather than a small independent bakery in Burlington. It may as well have been baked by AB-InBev itself. Dumb-ass move. (Don't worry - I have lots more of those in me.) But unlike Bud Light, at least it was very damn tasty.

After a few years of knowing him through Twitter messaging, I finally met my old buddy, Brian Wilson, the brewmaster at Highlander Brew Co. when our Boys Weekends resumed in tiny South River, Ontario.

Hell, just a couple of weeks ago, I met two of the three owners of Brock Street Brewing - Mark Woitzik and Victor Leone - as well as one of the owners at 5 Paddles Brewing, Spencer McCormack, when we held the Whitby Craft Brewery Invasion 2017. Super dudes, one and all.

There's been many more but I'd have to think about it and if you've ever read this, you've likely come to realize thinking only slow me down. But that's the thing about Ontario Craft Beer. Everyone is accessible. Everyone is happy to talk to a customer and fan. Everyone is a Regular Joe or Josephine. Or given our fast-paced times, Regular Name Withheld As Gender Still Undetermined. It's all good, man.

But meandering to the point (as I do), the person I was the most excited to meet this year was Garnett Gerry, the young dude who, in tandem with Great Lakes Brewing graphic designer Fabian Skidmore, created all those cool GLB labels. Way back in January 2016, I wrote about how these two got together and rebranded the GLB line-up.

It was, frankly, a brilliant piece of prose. Take my word for it. I think I won the Pulitzer Prize. *Checks notes* No, I didn't but that same week, I did win a free bagel at Timmies' Roll Up The Rim. Which is just as well because you can't eat a Pulitzer. The last time, I couldn't even trade a Pulitzer for food because as the convenience store owner kept braying it wasn't "legal tender" and "You have to wear clothes to be in here!" Bet you an Oscar would get you at least a cheeseburger. And a pair of shorts.

But I met Garnett at the Great Lakes Brewing 30th Anniversary Party in Toronto at The Antler Room back in February. (Man, that kicked ass!) He walked by my table and I thought to myself, "Holy crap, is that super-talented GLB label artist Garnett Gerry, the man with the first name last and the last name first?" (And this is why I don't stop to think... because this is the stupid-ass place my brain goes!) You have to understand, as a total comic book geek, of course, I would be the most excited by a long stretch to meet the cool artist drawing all those sick Great Lakes labels!

I had probably only had one (or five) beer at that point so I was thinking about how to go introduce myself without sounding like an idiot (yeah, never works) and the next thing I know, he's tapping me on the shoulder and asking, "Do you write a blog?" Well, cash me outside, how bow dah? Turns out he recognized me, too, because I had written about him. The thing is I started this little hunk-of-weird column in June 2013 and those Garnett Gerry labels started showing up very shortly afterwards. So his work has been pretty much with me for my entire craft beer ride.

We talked briefly at the Great Lakes Anniversary Party and, shit, he was pretty damn cool. He was clearly happy to meet a fan and appreciative of my words in the past. Just a fun, humble dude with 18 tons of talent.

So anyway, when I saw the Toronto Star's editorial cartoonist Patrick Corrigan had drawn a couple of recent GLB labels, my Spider-Sense was going off big-time. That could mean only one of two things. That Garnett Gerry had moved along to other things. Or that Doc Octopus had just robbed a bank. Turns out it was the first one. Gotta say, more than a little bummed.
Don't get me wrong. I suspect Patrick will be really great in this new role and the GLB labels will still have that fun feel... absolutely! But his first name and his last name are in the right order. I don't know what to do with that? It's all so confusing.

But in my last column, I had to say goodbye to my favourite craft beer bar, Rib Eye Jack's Ale House in Burlington and now in this one... my favourite label artist? Now I know they say the universe never throws more at you than you can handle... but if the universe could hold off now until about, oh say, next June? Yeah, that'd be great.

(A Quick "The Universe Is All Connected" Sidebar: Whenever a new GLB keg of their latest IPA came into Rib Eye Jack's, Kylie, my favourite Beer Technician was always torn in bittersweet throws. Why? "The beer is always so good, no one tries any of the other kegs!" Life can be harsh, kids.)

Naturally, I sought Garnett out to find out what the dillio was going on and he got back to me quickly. Turns out the dude wants to concentrate on his Mr. Toon business and see where that goes. Follow him on Instagram so you can say you knew him way back when - @mr.toon_gg  But it just turns out, like many of us, he was simply ready for a change. (Frankly, I'm ready for the big life change a lottery win would bring me.)

But back to Garnett: "Yeah, after years of doing work for GLB, I was done creatively and would like to put all my focus on Mr. Toon."

Okay, though, dude, let's look back at the past few years. Gimme a fun Great Lakes Brewing memory, Garnett. "One of my favourite moments was the first party at the Loose Moose (in downtown Toronto) for a (Great Lakes Brewing) Tap Takeover. It was cool seeing all my work everywhere, getting asked to autograph posters and just straight-up party like a rock star."

As for Mr. Toon, he's ready to rock it. "I'm slowly working on merchandise, like hats, hoodies and shirts. And, also at the moment, I'm looking into (art) shows and more walls for me to work on." (The man loves doing him some murals.)

Okay, brother, any final thoughts on your place in Ontario craft beer? "I'm really happy and proud to have been a part of Great Lakes Brewing and working on all those labels." And there you go.

So you know, our man Garnett, Windsor-born-and-raised, went to Fanshawe College in London to become an actor.
That didn't happen so he came to Toronto, started working construction and draws in his spare time. The story behind the story. And probably his Tinder profile.

Right now, he is working on getting a domain for a website, which every business, artistic or otherwise, truly needs and when he gets that all set up, I will happily pass it along for his many fans, of which I am clearly one. But for now, you can find him on Facebook (Garnett Gerry), Instagram as mentioned above or Twitter where he's Mr.Toon @garnettgerry. So follow him because Canadian artists need lots of support and followers. But not stalkers. No one needs those.

He'll post whenever he has a showing and despite having a full-time job, he still manages to find time to sketch. "On my lunch break, after work and any free time at all, I'm drawing for GLB or just for shits and giggles," he told me the first time we talked. (Remember, people, shits and giggles are all very well and good... until you giggle and shit. That's considerably less fun.)

So how about the new kid on the GLB label block, this Patrick fellow? Well, if you live in Toronto, he ain't new or a kid to you. Patrick has been one of the core Toronto Star editorial cartoonists since 1992 so he been a mainstay on that page for 25 years now. Prior to that, he was the paper's staff illustrator since 1983 and prior to that, lessee now, the Ontario College of Art graduate was a cab driver, health food store owner and even a dishwasher on the Canadian National Railways train between here and Winnipeg. So this dude has been around.

But I had to go to Troy Burtch, GLB's social media and marketing guru, to ask how they managed to land such a big-name artist. Troy got back to me with this answer. "I know him and asked." Okay, that was a little easier than I had imagined. While Garnett's GLB beverage of choice was Thrust! An IPA, Troy tells me that Patrick leans towards their Audrey Hopburn Belgian IPA, as well as all their other IPAs. So, like all of us, eh?

But lemme tell you that on New Year's Eve, I'll be down in Las Vegas watching our Toronto Maple Leafs play their first ever game in Sin City. But prior to the game, I will be wearing my GLB Canuck Pale Ale shirt featuring the legendary Gordie Levesque as I am a proud member of Gordie's Legion on Facebook. And if anyone asks me what my shirt is, I'm totally gonna say, "What, this old thing? Yeah, it's a Garnett Gerry original." I'm not afraid to throw the big names around. Let those Americans know we have a few frikkin' fashion icons up here, too. But guys and dolls, that's it, that's all and I am outta here! Until next time, I remain... 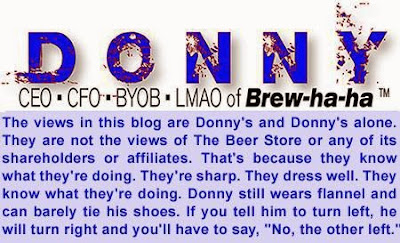